크게 작게 위로 아래로 댓글로 가기 인쇄
After three seasons of his successful cooking show “Chef Nic”, Nicholas Tse takes his passion for culinary arts to the big screen with Raymond Yip’s Cook up a Storm, in which he plays Sky Ko, an Cantonese street cook whose well-loved restaurant in a picturesque alley of Hong Kong is threatened by property developers. Now, Michelin-starred chef Paul Ahn (Jung Yong Hwa) is opening a high-end restaurant right opposite Sky’s modest but welcoming diner. The two start butting heads, and soon they find themselves pitted against each other in a TV culinary competition. Whoever wins will get to go head to head with the “God of Cookery” Mountain Ko (Anthony Wong), who’s none other than Sky’s selfish and driven father, having left him at a young age in the hands of his friend Seven (Ge You), a wise and kind chef. Sky loses to Paul, who in turn is betrayed by his girlfriend and sous-chef Mayo (Michelle Bai), and thus the two initially hostile chefs but join forces to claim the title of “God of Cookery”.
Cook up a Storm hits many of the same narrative beats as Gina Kim’s recent foodie drama Final Recipe – a son reunited with his estranged father during an international cooking competition that he entered to save his restaurant – with the same message that cooking with heart is more important than cooking elaborately. But Raymond Yip’s film is more assured and effective in its crowd-pleasing aim, and even more spectacular in its displays of food porn. In fact, cooking has rarely been displayed on film with such over-the-top glamour and flash, with ample but mostly pleasing CGI backing, of course. In between the foodie set pieces, there’s an amiable but unremarkable soapy feel to the proceedings, with romantic back-stabbing, filial estrangement, friendly support and corporate mischief combined in a mixture that an attractive cast keeps from getting too lumpy.
Nicholas Tse and K-pop star Jung Yong Hwa (in his big screen debut), seem to be constantly trying to out-handsome each other, but remain consistently likable, with even a dash of understated chemistry when teamed-up. Tiffany Tang and Michelle Bai are mostly sidelined as a clumsy-cute friend (Charlene Choi was presumably unavailable) and a double-dealing ice queen, respectively. Ge You always seems like he’s just waking up from an afternoon nap, but Anthony Wong (who despite his central role is absent from all marketing) easily owns every scene he’s in as a cynical, seemingly heartless father: his effortless charisma always bounces perfectly off Nic Tse’s intensity, and they make the finale more affecting than it had any right to be given how contrived it is. Only the Wong can make crying while eating noodles an effective emotional climax.
Long Story Short: A flashy and contrived foodie comedy, Cook up a Storm nevertheless entertains solidly and amiably, thanks to a good cast, an unpretentious disposition and some spectacular cooking scenes. ***
https://asianfilmstrike.word★press.com/2017/04/08/cook-up-a-storm-2017-review/
영화 자체는 다소 뻔한 전개에도 불구하고 좋은 배우진과 화려한 요리 장면이 볼만하다는 평이네요.
용화 언급한 부분만 번역해보면,
"사정봉과 (첫 스크린 데뷔를 맞은) 케이팝 스타 정용화는 영화 내내 누가 더 잘생겼는지 대결하는 듯 하지만 꾸준히 호감도를 유지하며, 두 사람이 함께할 때면 절제된 케미스트리가 살짝 보이기까지 한다."
폴솊의 서사가 상당히 축약된 점을 감안한다면 스크린 상의 외모평은 물론이고 연기평도 좋은 듯^^
Prev [더패키지 ThePackage] 프랑스 페스티벌 첫 화 감상/브로셔 First... 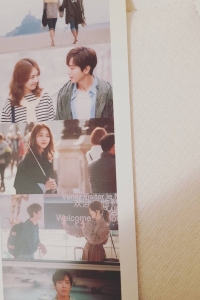