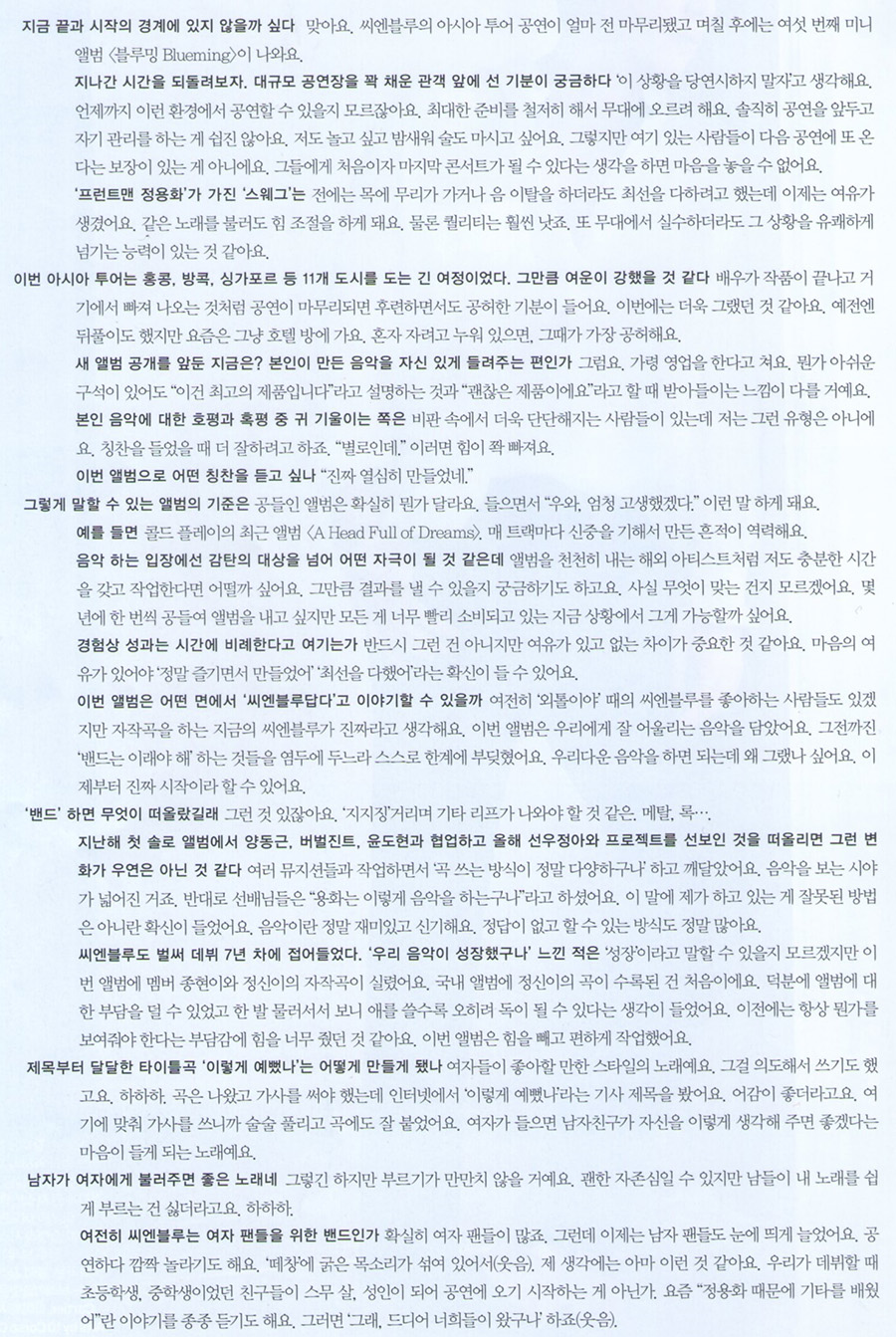 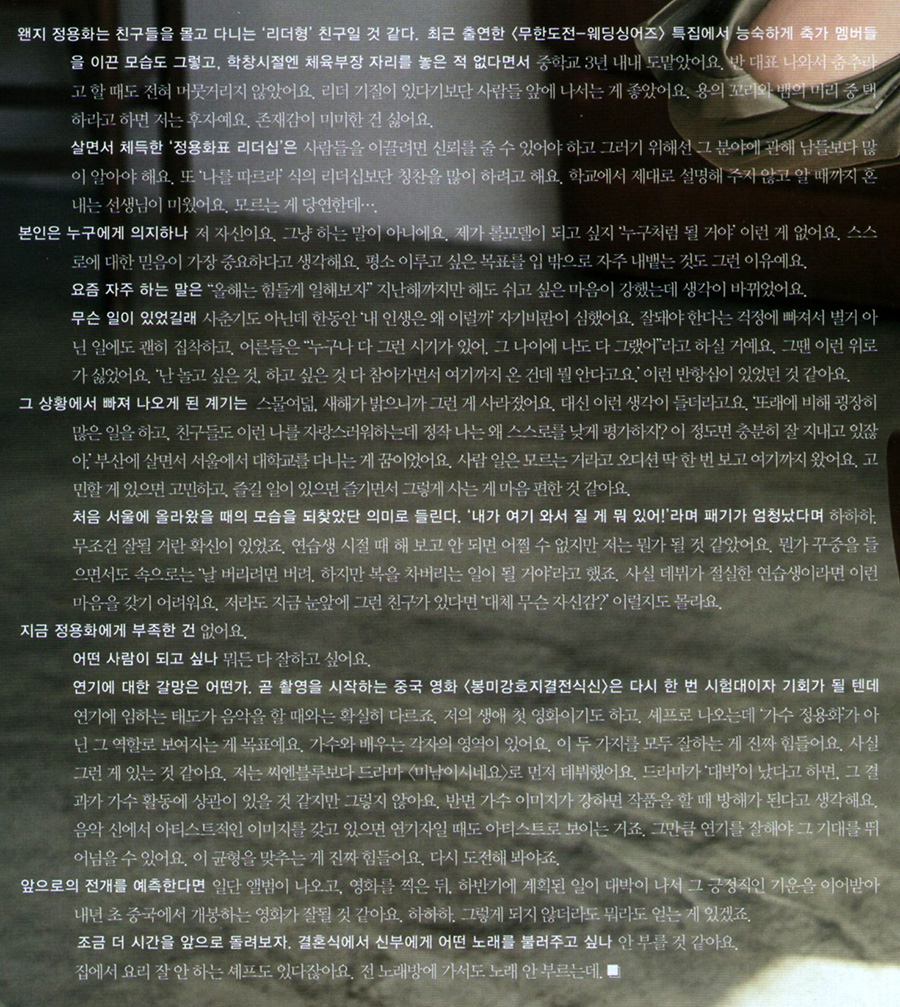 You are probably at the border of an end and a beginning. Right. CNBLUE's Asia tour ended shortly ago and the sixth album "Blueming" will be released in a few days.

Let's turn back time. I'm curious how it feels to stand in front of a the audience that fills a huge venue.  I think, "Let's not take this situation for granted." I don't know for how long I can continue to perform in an environment like this. I try my best to prepare flawlessly before i go on the stage. To be honest, it's not easy to have self-discpline before a show. I want to hang out and drink the night away, too. But there's no guarantee that these people will come to our next show again. When I think that this could be their first and last concert, I can't be laid back.

What's your "swag" as a front-man? Before, I used to push myself even if it's taxing on my throat or go off-pitch. But I'm relaxed now. Though I'm singing the same songs, I can regulate my vocal strength. Of course, this make the quality so much better. Also, even when I make a mistake on the stage, I know how to deal with it in a lighthearted way.

This tour is a long one, spanning over 11 cities such as Hong Kong, Bangkok, and Singapore. It must have left you with strong emotions lingering afterwards Just like when actors complete their filming and need to snap out of it, after a tour I feel both relieved and empty. It seemed especially so this time. I used to have after-parties, but now i just go to my hotel room. Lying down alone to go to sleep, that's when I feel that emptiness the most.

How about now, before the release of a new album? Do you tend to be confident when you let people listen to the music you made? Of course. Say you're promoting something. Even if there are parts you're not sure about, it's very different to say "This is the best product" and "It's alright."

Between praise and criticism about your music, which do you tend to listen? Some people get hardened through criticism, but not me. I try to do better when I receive compliments. If someone says, "it sucks," that wears me out.

What kind of compliment do you want to hear about this album? "You really put hard work into this."

How do you determine such an album? The albums that are carefully made are definitely different. Listening to it makes you think, "Wow, they must have suffered a lot."

For instance? Coldplay's recent album, "A Head Full of Dreams." There are clear traces of care put into each track.

From a musician's point of view, it must be not just something to admire, but also one that stimulates. I wonder how things would be if I could work with enough time, like the foreign artists who take time to release albums. I wonder if I can produce something very nice. In fact, I'm not sure what's correct. I want to put a lot of care into an album for years to release it, but I wonder if that's possible now when everything is consumed at such fast rates.

Do you think that quality is always proportional to time?  Not always, but it's important to have the leisure. Having that relaxed mind is the only way that I can be assured, "I really enjoyed making this," or "I really did my best."

In what way is this album ‘CNBLUE’-like? Some people may still like CNBLUE from the ‘I’m a Loner’ days, but I believe today’s CNBLUE that makes own compositions is the real deal. This album contains music that’s very us. Before, I had run into limitations because I was caught up with things like “a band should be a certain way.”  We can just do music that represents us, I wonder why I was that way. I’d say this is the real beginning.

What popped into your mind when you said “a band”? You know, things like, the guitar riff going “zzzing.” Metal, rock…

When I think of your collaborations with YDG, Verbal Jint, Yoon Dohyun in your solo album last year and the project with Sunwoo JungA this year, such a change doesn’t seem coincidental. While working with many musicians, I realized “There are such different ways of composing music.” It broadened my perspective toward music. On the other hand, the sunbaes said, “So this is how Yonghwa makes music.” Hearing this, I was vindicated that what I’m doing is not wrong. Music is so interesting and amazing. There’s no correct answer and there are so many ways of doing it.

CNBLUE is already in your 7th year since debut. When did you feel, “our music has grown”? I don’t know if we can say it’s a “growth” per se, but Jonghyun and Jungshin’s self-compositions are included in this album. It’s the first time that Jungshin’s track is included in a Korean release. Thanks to this, it took some of the burden off my shoulders about the album. Taking a step back, I realized the more I struggle with it, the more poisonous it could be. I used to overdo things because I always felt the pressure that I must show something. I worked on this album in a relaxed, easygoing way.

Such a sweet title, ‘You’re so Fine’ — how did you write it? It’s a style of music that women would like. It was written that way on purpose. Hahaha. The music was finished, I needed to write the lyrics. On the web, I read a news article with the title, ‘Was she this fine?’ It had a nice ring to it. The lyrics just flowed readily from it and worked so well with the song, too. It’s a song that makes women wish their boyfriend would think of them this way.

That’s a nice song for men to sing for women. It is, but it won’t be easy. I might be hopelessly proud, but I don’t like it when other people have an easy time singing my song. Hahaha.

Is CNBLUE still a band for female fans? We definitely have many female fans. But now we have significantly more male fans. Sometimes I’m surprised when I’m performing. In the crowds’ singing voice, I hear a mix of thick, low-key voices (laughs). This is what I think. When we debuted, the kids who were in elementary and middle schools are now in their 20s and are beginning to come to our concerts. I sometimes hear, “I learned the guitar because of Jung Yonghwa.” Then I’d think to myself, “Yes, finally you guys are here.” (laughs)

I have a feeling you’re a leader-type friend. In your recent appearance of Infinite Challenge - Wedding Singers Special, you were very good at leading the members. I also heard you were the Physical Education manager throughout your school years.

I (was the P.E. manager) for all 3 of my middle school years. When they asked for a class representative to come out and dance, I never hesitated. Not that I’m much of a leader-type, but I liked standing in front of people. If I were to choose between the tail of a dragon and the head of a snake, I pick the latter. I don’t like to have vague presence.

To lead people, you must be able to earn their trust. To do that, you must know more than others. Also, rather than a “follow me” type of leadership, I try to give as many compliments as I can. I didn’t like it when the teachers at school don’t explain properly but scold you until you find out. It’s natural to not know things (beforehand)…

Who do you rely on?

Myself. I’m not just saying this. I want to be the role model, I’m not like “I wanna become like somebody.” I believe the most important thing is to believe in oneself. That’s the reason I keep saying out loud the goals I want to reach.

What do you say often these days?

“Let’s work hard this year.” Until last year, I wanted to rest more but now I’ve changed my mind.

It’s not even puberty, but for a while, I was very harsh at self-critique. I was deeply worried about making it big, obsessing over small things. Those older would say, “That happens to everybody, I was just like that when I was your age.” But I didn’t like this kind of consolation back then. “I restrained myself from having fun and doing what I want to do to reach this far. What do you know?” I had this kind of rebellious thought.

How did you escape it?

Turning 28, with the new year, such things disappeared. Instead, this is what I thought: “I work so much compared to my peers, my friends are even proud of me. What do I underestimate myself? I’m doing just fine.” It was my dream in Busan to attend college in Seoul. You never know what happens to people, I came all the way here with just one audition. I think it’s relaxing for the mind to have concerns when necessary, but having fun when there’s an occasion.

To me it sounds like you’ve gone back to how you used to be when you first came to Seoul. You were fiercely brave, saying “What is there to lose?”

Hahaha. I had the conviction that no matter what, I will succeed. When I was a trainee, though if things don’t work out, they don’t, I felt that I could be something. Even when I’m being scolded, I’d think to myself, “If you wish to abandon me, go ahead. But you’ll be throwing away your luck.” In fact, it’s difficult to think this way if you’re a trainee desperate for a debut. If there’s a kid like that in front of me now, I might say “On what basis?”

What kind of person do you want to be?

I want to be good at everything.

What about your desire for acting? The Chinese film that you’ll be filming soon, “Cook Up a Storm,” will be another testbed and opportunity for you.

My attitude toward acting is definitely different from music. It’s my first film ever and I will be a chef. My goal is to be seen as that role and not the “singer Jung Yonghwa.” Singers and actors each have their own territories. It’s so difficult to do both well. I feel there’s this thing. I debuted first through “You’re Beautiful” rather than as CNBLUE. Say a drama hits a jackpot, one may think it might have some impact on the music activities. But it’s not so. On the other hand, if one’s image is too prominent as a singer, it’s an obstacle for acting. Having that artist image will make one be seen as an artist even when acting. I need to act even better to surpass that expectation. Meeting this balance is really hard. I’ve got to try again.

Guess what will happen next.

First, the album will be released, I will film a movie, and what’s planned in the latter half of the year will hit a jackpot. This positive vibe will carry over and be auspicious for the film which will play in China early next year. Hahaha. Even if this doesn’t happen, I’m sure I’d earn something.

Let’s fast forward time a bit more. At your wedding, what kind of song do you want to sing for your bride?

I don’t think I will sing. I heard some chefs don’t cook at home. I don’t even sing at karaoke. 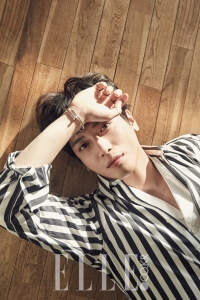