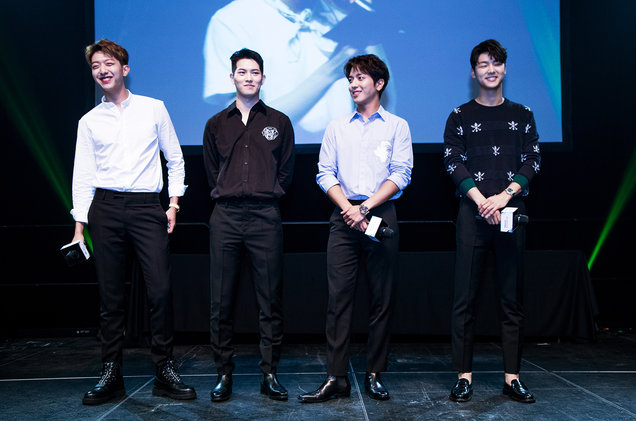 When Korean pop-rock band and KCON NY headliner CNBLUE enters the interview room at the Prudential Center, leader and vocalist Yonghwa makes his presence known. He walks in with a swagger and introduces himself in English, while Jonghyun (guitarist), Minhyuk (drummer) and Jungshin (bassist) smile sheepishly at their leader's antics.
The members' relaxed, jovial natures belie the initial difficulties they faced along the path to becoming KCON NY's Saturday night headliners. The band, FNC Entertainment's second pop-rock group following the success of F.T. Island, initially made its debut in Japan in 2009, where the members performed on the streets of Tokyo. CNBLUE's first mini-album, Now or Never, failed to chart; after the band's second Japanese EP peaked at No. 227 on the Korean albums chart, the members returned to South Korea at the very beginning of 2010. CNBLUE's first Korean single, the addictive and insanely hummable “I'm a Loner,” was a commercial success that carved out a place in the K-pop industry for the band's pop-rock sound.
The conflict between the authenticity of the rock sound and the rigid nature of the Korean pop industry is "something of the past," Yonghwa says. “Times are changing so fast with social media and whatnot. I feel like it's more important to go along with the changes of the industry -- as a band, that's what we're trying to do.”
“Us as a band, we try to synthesize what's hot in the music industry while we're retaining our own colors as CNBLUE,” Yonghwa adds. Since the release of “I'm a Loner” over seven years ago, the members have experimented with everything from swing (2016 single “You're So Fine) and modern electronic (7CN's “Between Us” and “When I Was Young”) to Latin sounds (“Diamond Girl,” 7CN's “Royal Rumble.”)

CNBLUE on the red carpet at KCON NY 2017.
“I definitely feel like Yonghwa is good at spotting trends musically,” Minhyun says of the group's leader, who produces the vast majority of the band's music. “Utilizing pop sounds within the music that we're doing...I'm really proud of that, and I really enjoy doing that.”
“If you see bands like Maroon 5 or Coldplay, when they release their albums, you listen to them and you immediately think, 'Oh, they're able to do this genre,'” Yonghwa says. “Meshing all these genres is a trend, and we're trying to be at the forefront of that trend.”
The genre-meshing sound of CNBLUE's latest EP 7CN landed it on the Billboard World Albums chart earlier this year, where it came in at No. #8 in its first week of sales. “Personally I feel like we still have a long way to go and a long way to grow as a band, so 'seven' is the temperature we're at currently,” Jungshin says of the EP's name.
Despite the humility of the EP's name, however, the band is immensely proud of what they've achieved and the songs they've created -- it's easy for them to narrow down which songs they're proudest of when asked.
"Between Us," Yonghwa answers. “I feel like that song has the strongest pop-flavor style. The songs I'm most proud of are newest songs that we've just released.”
“When I Was Young,” Jonghyun says: a future EDM-influenced song he produced and arranged for 7CN. “I'm really trying to reconcile two desires within me [while] preparing for a new album,” he says. “Right now, when I listen to really old but classic rock songs, I really like those, but I also really like house music as well. My homework is to try and figure out a way these two genres can blend and make a good song.” The goal? Something like Daft Punk and Pharrell's “Get Lucky,” they suggest. They've recently rediscovered Jeff Beck, making Jonghyun's homework even more complicated.
For over seven years, they've captivated listeners in both South Korea and Japan, their popularity even withstanding the wane of hallyu in the latter. Their talents go far beyond music shows and concert stages; each member's taken over television screens in South Korea with numerous drama roles, with Yonghwa making his big screen debut earlier this year as a chef. What's next for these hyphenated talents?
“Billboard Hot 100,” Yonghwa says with a laugh. “I'll take No. 99.”
http://www.billboard.com/articles/columns/pop/7857101/cnblue-interview-kcon-ny
3