Park Seju (28) Cast Jung Yonghwa
Handled roughly here and there, he's the maknae(youngest) VJ of the team
But actually the grandson of CEO, an undercover boss?

He's the maknae of Morning 3 team who does all the tough chores.
But a peculiar sort of relaxed air can be always felt from him,
because his real identity is YBS president's grandson, meaning he's a 3rd generation chaebol.
Dreaming of a media empire, he's working in disguise to understand the business from bottom-up.
PDs who don't know his identity call him "ya (condescending address)" instead of his name,

kicking his joints and beating the back of his head, but he'd just smile all the time.
(Why? He's going to be the boss anyway!)
At the moment, he's leisurely sorting out those who are harmful to the company.
Stereotypical gentle-on-the-outside/strong-on-the-inside type, though he seems like a gentle, quiet man,

the blood of a fierce businessman flows inside.

But there was a moment when his cold heart melted for a while,
it's when he saw a woman who was swimming freely like a fish.
And coincidentally, he met her again at the TV station.
Na Mirae, who does all the hard labor just like himself, taking in all the insults... 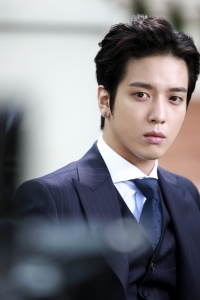